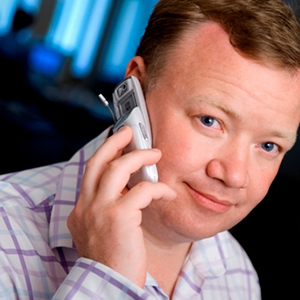 John Strand has a background in Sales and Marketing in the IT and Publishing Sector and has been consulting on strategies, sales and marketing since 1989, ending in the early 1990’s as a partner at a consultancy company.

In 1994 John founded Strand Consult. In the early days of Strand Consult the primary focus was on CRM – analyzing and evaluating sales processes and performance for the IT, Telco, Media and Finance sector and helping customers optimize these, enabling them to move more merchandise at reduced cost.

As a growing number of customers came in from the mobile sector, John quickly realized that here was a sector that was already evolving at a tremendous pace and which would face enormous challenges as the infrastructure and mobile terminals developed. Strand Consult has since focused solely on the mobile sector, analyzing markets and market trends, publishing reports and holding executive workshops that have helped mobile operators, mobile services providers, terminal manufacturers and media companies all over the world focus on their business strategies and maximizing the return on their investments.

John is one of the best-known consultants in the business. Anyone who has met John Strand knows that he always speaks his opinion. Being honest – and giving his honest opinion on current issues in the mobile industry has become John’s trademark – even when it means being controversial or treading on a toe or two…

The fact that John works in an industry that loves to hype new products and services is no secret, on the other hand John is the first to object. Hype simply does not work on John. He is quick to cut through the BS and use facts to specify the difference between hype and what will happen in the real world.

Together with his team of analysts, John Strand has a unique ability to predict the future of the Telecom industry and the other industries that this exciting business is converging with. Many people are naturally skeptical about fortune-tellers – John Strand’s attitude is that people should not judge him on what he is predicting about the future, but rather on what he previously predicted would happen today.

John Strand’s uncanny ability to predict coming challenges for the mobile market and his straightforward attitude to what customers are doing right and wrong has made John a valued speaker at conferences around the world and he is constantly being quoted in the International press.

The international press often quotes John Strand. His precise statements combined with a unique insight in the industry he lives and breathes for, often results in journalists using his knowledge to help make complex issues understandable. That ability – combined with his ability to foresee how markets and products will develop – is most probably why many refer to John Strand as a media darling.

John is on the board of directors of a number of Scandinavian and International companies, and is a former member of the Advisory Board for the 3GSM World Congress.